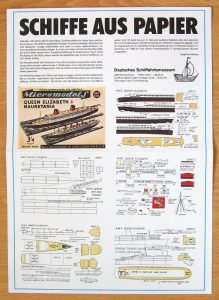 In 1989 the Deutsches Schiffahrtsmuseum (DSM) , Bremerhaven held several expositions throughout Germany with nautical paper models called “Schiffe aus Papier”. To let visitors get in touch with the, at that time rare Micromodels they re-issued three Micromodels, each printed on a large sheet:

On set S IX only the Queen Elisabeth was printed.