Micromodels history started in 1941. Something revolutionary arrived on the paper model market. Geoffrey Heighway invented and marketed the first printed card Micromodel. He took the established concept of the printed paper model and miniaturised it. An entire fleet of ships , a building or a set of locomotives could be packed into a small paper wrapper the size of a postcard. 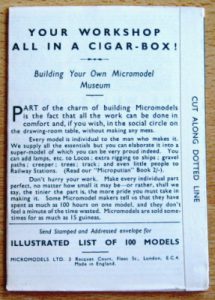 At another time or place the idea may not have worked, but in Great Britain during the 1940s the idea struck a chord and “micro modelling” became a national pastime. The popularity was mainly due to a combination of well drawn artwork, choice of topical subjects and originality. What also helped was low purchase prices, shortage of normal modelling materials and the limited space and tools required for construction.

Many modellers carried their partly completed models, glue and small tools around with them in a cigar box. Having a hobby project to hand helped to pass the time if you were sat in an air raid shelter or were travelling overseas on a Troop ship. Heighway noticed this trend and quickly coined the sales slogan, “Your Workshop all in a Cigar box!“. A phrase that became synonymous with the product name “Micromodels”.

Although Micromodels Ltd. and Modelcraft Ltd. were two separate companies, their products are collected as one by the majority of collectors. The reason for this is because the format of their card kits is so similar. Also the word “Micromodel” is used on the wrappers of both ranges of card kits. This history is, therefore, a composite of Modelcraft and Micromodels card models.

Modelcraft Ltd is formed by a Mr. Herbert Stennett Coleman. The Company initially involves itself with providing plans for the model making enthusiast. This includes model boats, railway lineside buildings and aircraft. The company address is 77 Grosvenor Road, London SW1.

The factory of Modelcraft was bombed. Luckily they could resume producing their plans and their war contracts.

Geoffrey Heighway becomes Modelcraft’s chief designer of card models. The product name “Micromodel” is coined, and a range of miniature card kits are introduced. Most have a military theme. The concept and product name are almost certainly Heighway’s invention.
The first of Heighway’s printed card Micromodel sets was set A1 The Romance of Sail. A collection of six miniature sailing ships derived from large scale plans marketed by Modelcraft Ltd. This set was followed by further Wartime issued sets derived from Modelcraft Ltd. plans. These eight models were:

After World War II an importing company Jenid Imports of Minneapolis became the U.S. distributor for Micromodels. This company was run by Dr. L.G. Idstrom, an American doctor, who was stationed in England during W.W.II . He became an enthusiast of the models during his stay in the UK.

Heighway formed his own company called Micromodels Ltd. He opened a small office at 6 Racquet Court, Fleet Street, London EC4. As Modelcraft Ltd. have never registered “Micromodel” as a trademark, Heighway is able to take the term with him and use it as the name of his new Company and his own trade mark. Company officers are, G. Heighway, E. M. Heighway (his wife) and B. M. Welch, company secretary.
The office was really only used for administering and marketing the product. Preparation of artwork and printing was sub-contracted. Mr. F. C. Banks of Rayleigh, Essex, prepared large drawings of 4-5 times finished size with overlays for colour, whilst the printing and collation was sub-contracted to Galbraith, King & Co. Ltd. , of Leman Street, London E1.

Proof sheets were printed prior to a full print run, which were then made up and approved by John B. Thorp, owner of Thorp’s Model Shop of Grays Inn Road, London. Thorp was situated a few minutes walk from the Fleet Street premises of Micromodels Ltd.

The first five post-war Micromodels Ltd. Micromodels were priced at 1/3d per packet (one shilling and three pence).  These all had a railway locomotive theme and were:

Modelcraft Ltd issue the first 6 cards of an austerity series of single card railway and road vehicle models.  These are priced at 4d and 9d each respectively.

Heighway relieves Modelcraft Ltd of one of its early sets, The Romance of Sail, and re-issues it as a Micromodels Ltd product, under the new title Six Little Ships & Galleons.  One must presume that Modelcraft Ltd had never copyrighted the model. They either were bad businessmen or they  had some sort of agreement with Heighway, that the artwork and concept were his to take.
Heighway issued a further 9 new sets. These were again mostly locomotives but 2 were the first architectural Micromodels –  The Watermill and Anne Hathaway’s Cottage.

Modelcraft continues with the single card theme and brings out more railway engines and lorries.

Modelcraft Ltd have done little to return to their wartime theme of packet micromodels. They instead have continued with their range of single card models. Their main product line is the supply of scale plans for model making enthusiasts.

Heighway starts marketing the first of the seriously large models: Tower of London.

Modelcraft Ltd issue a simple 2 card model of the Skylon, whose only redeeming feature is the packet artwork.
The wrapper back of Festival of Britain informs us that the following Micromodels were also selected by the authorities as official souvenirs:

A special “Festival of Britain ” sticker was pasted on the front of the wrappers.

In addition, the following made-up Micromodels were selected for official display:

Heighway brings out another large model: Old London Bridge.
Micromodels Ltd move from 6 to 3 Raquet court. Presumably this was a move into larger premises.
Collectors will note a change of address on the back of the packets on the models printed during and after 1951.

The Model Railway Exhibition of april 1952 sees both companies displaying their products.
The new Micromodels Ltd set X2 is on sale. But due to difficulties with the wrapper, it is presented in a plain brown paper band with the title and price typewritten across.
Heighway was claiming, in his adverts, a range of 100 models. This sounded impressive at the time, but on inspection we can see that Heighway’s claim was not based on counting the sets but in adding up the contents of the sets.

Modelcraft have their plans and single sheet Micromodels on sale. They are also displaying their “Microcraft” Motor Cruiser and Queen Mary in a large tank of water. These are similar in concept and presentation to Micromodels, but are actually working toy boats propelled by the chemical reaction between methylated spirits (unlit!) and water.

The largest publication in the history of Micromodels is the giant Hampton Court Palace model.

In 1956 Geoffrey Heighway sold Micromodels Ltd. – including artwork, printing plates and all unfinished prototypes – to an American businessman, Mr. S. Friedlander who owned a London based, mail order, postage stamp approval company Broadway Approvals. This company was run by George Santo.
A large number of new projects were catalogued as in hand at this time.
The new company address for Micromodels became Broadway Approvals, 50 Denmark Hill, London SE5.

Dr. L.G. Idstrom from the U.S. based Jenid Imports bought a large portion of the stock plus some of the original artwork. He turned over the marketing to the Storm Company in Minneapolis. An attractive wire rack display was designed and the models were sold through hobby stores across the U.S. 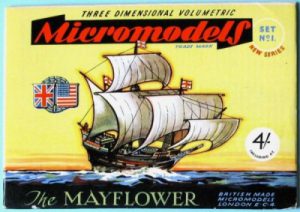 The last packet Micromodel was published in 1957. This was the Mayflower Supermodel“.

Broadway Approvals issued some Micromodel catalogues: ‘Micromodel Kits‘ and ‘Micromodels‘.  A large number of older models had been deleted, whilst all the much-heralded new projects have been shelved. No attempt was ever made to re-print any of the models so the catalogue merely listed what was available from warehouse stock.  Micromodels Ltd. at this point began its slide into oblivion. Now modellers had a vast range of plastic kits to attract them from companies such as Airfix and Triang. The austerity years that had created Micromodelling had drawn to a close.

The last advert for Micromodels appeared in the Meccano magazine for February 1959.

Modelcraft Ltd have been trading throughout the 1950s, mainly with their scale plans and conventional kits. They occasionally placed ads in the modelling press and in Meccano Magazine in order to push sales of their single card models.
Large stocks of which survived from the 1940s.

Mr. Coleman, the owner of Modelcraft died this year, so the company was sold to E. Rankine Grey, better known as the model company ERG, of Bournemouth.  ERG were one of the many specialist suppliers of model railway accessories and parts that existed in England in the 1940s and 50s. They had been selling Modelcraft products through the ERG mailorder catalogue for a long time, and they had a good working relationship.

There has been no mention of any sign of the original artwork or printing plates. It is assumed that the artwork and plates were disposed of because:

ERG would make a comfortable living just selling the stock without the hassle of storing all the artwork & plates.

During the 1960’s and the 1970’s the models became very popular in the U.S. when The Storm Company and Vintage Models of Los Angles distributed them through hobby shops in the U.S.

Vintage Models of Los Angles started selling in the U.S. in the early 1970’s when they bought the remaining large stocks from one of the largest dealers of Micromodels in the U.K. .

From the early 1960s to the early 1970s the Micromodel stock languished in a warehouse until discovered by Michael Abrahams. He was the owner of the Watford Model Supply Company. He bought the entire old stock from Broadway Approvals.
The first advert announcing the re-introduction of these old model kits was placed in the November 1971 issue of Scale Models magazine.
For the next few years, Micromodelling enjoyed a brief and nostalgic revival as Watford MSC sold off large quantities of kits at knockdown prices.
It is this disposal in the 1970s that is the source of most of the more obtainable Micromodels that are in circulation today.  It is obviously the absence of certain out of print Micromodels in this disposal that is the critical factor concerning the considerable rarity of some Micromodels compared to others.

A Micromodel collector and enthusiast, Peter Gray from Micromodel Distrubutors purchases all the Micromodel production artwork and plates from Broadway Approvals. This collection is basically a time capsule of the company at the moment Geoffrey Heighway sold the company in 1956.
Included in the collection are all the prototypes, sketches, artwork etc for the models that were never issued.

E. Ranking Gray retires and sells the effects of ERG  and Modelcraft to one Jock Stewart.

Moore and Lowe set up an ERG model shop at 199 London Road, Dover.
This year the premises were flooded ruining much of the stock.

Myles Mandell buys the remaining stock of the Storm Company along with the original art work for about 15 models. He published four models twice the size of an original Micromodel.

A Midlands Micromodel enthusiast and professional model manufacturer David Gilbert purchases from Micromodel Distributors all the production artwork, plates and sketches, including most of the never issued material from Micromodels Ltd. His company is known as Autocraft / D.G. Models.

The Skinley Drawing Business was sold to Phil Brice.

Late 2015 the Historical Model Railway Society (HMRS) purchased the John Skinley Drawing collection from Phil Brice. The HMRS are now the owners of the Copyright covering all products made and designed by:

The HMRS started researching the extensive archive material for the purpose of cataloging. It will in due course be identified on the HMRS search database. They do not only preserve the collection but also collect and fill in the missing parts to complete the archive for future generations.

The HMRS acknowledges that this is an important collection that tells the story of how OO scale model trains started and how modelling with cardboard was an important pioneering aspect of the hobby.