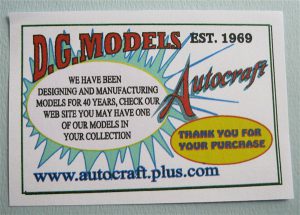 His interest in Micromodels goes back to the late 1940s when he lived in London with his parents. As a boy he accompanied a relative who wrote for a model magazine to do an interview with someone called ‘Jeffery Highway‘ ! The interview was about his range of card kits. David sat in the corner of the pub where they met, with a bottle of lemonade and a bag of crisps until they had finished talking. This started his interest in these kits. His brother was already a keen Micromodeller. 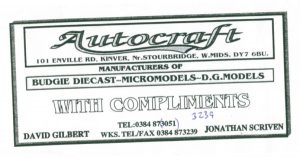 In the mid eighties the new business name Autocraft was used (although the name D.G.Models is also still being used today).

Until today the card models are only a small part of the business. The design and manufacture of the pewter (white metal) cars  takes most of the time. The paper model side of the business is more of a passionate hobby than a lucrative money making venture.

In 1989 Autocraft re-issued some rare Micromodels using the original plates and artwork:

Two versions of each model were offered: the first version has the Autocraft address. The second version is a straight re-print of the original with Micromodels address. Both versions are printed on modern white paper, so they are distinguishable from the originals.
Collectors have to be cautious. When you see only a picture of the second version it is impossible to determine if it is an original or a re-issue.

Autocraft also publishes a wide range of reproductions of other Micromodels, but they all can be recognized by altered covers.

Micromodel Distributors issued four models in the HL series in 1979: Cripplegate, Moorgate, Aldgate and Alder’s Gate. They have full coloured cards and a reworked black & white wrapper. Peter Gray of Micromodels Distributores wanted to generate interest with these models, and if succesfully he would re-issue the other London Gates. The models were sold at the Gift shop from the Science Museum in London. In this museum the full size models built by John B. Thorp were on show.

Alas the sales were not as much as he hoped it would be, so publication of the other gates was cancelled. Later Autocraft published the other models in the HL series.

Today all the models of the HL series are sold by Autocraft. 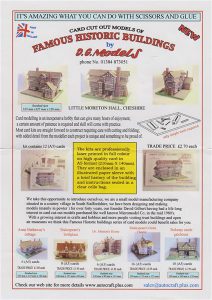 In 2016 D.G. Models started a new series of paper models. These models are all famous historic buildings in the UK.
The models are all drawn with completely new original artwork. They are larger than the micromodels, but there are some similarities: The cards are packed in a wrapper with the instructions inside the wrapper. Also the instructions on the cards look familiar. Size of the cards is 21 x 15 cm.

Autocraft is developing a set of 12 models on postcards. Size of the cards is 21 x 15 cm.
These models are even smaller than the micromodels, but with less detail to keep it possible to actually build the model.
Here are a few examples of the test prints: